Hello,
My name is Arianna, and I am 19 years old. I decided to participate to the SYLE project, and I went to
Israel for around three weeks. I was hosted by 6 different families. I have a lot of beautiful memories,
in fact all the people who hosted me were very kind and at the end… I didn’t want to come back! The
first host I went to was Nirit. She lives in a little village in the North of Tel Aviv. With her we visited
the city, walked by the sea went to a music festival and I was touched by seeing all the different kind
of people live peacefully together (first picture).
Nechama and Niko hosted me for a few days in their beautiful house in Hararit, a village in the North
of Israel. I met their family, visited the surrounding and spent a pleasant time with them, singing,
playing, and learning all the time, about the Jewish culture, and the traditional dishes (second
picture).
I had also a young day host, Stav, and with her I visited Farod and the amazing surrounding of the
village (third picture).
Just for one night (unfortunately!) I stayed at Mira and Arie’s. I didn’t have enough time to get to
know them, but it was a nice surprise to meet Esther, their tenant, who brought me to visit (and
ride!) the nearby riding centre where she works (fourth picture).
It was a great experience to camp in the Galilee Sea with Ori ‘s young friends! Ori’s family is
composed by Irit, Ya’al, Snafke (the big white dog) and 5 cats! With them we went to some museums
in Haifa and Tel Aviv, to the beach, the river, we did some nice walks and visited Nazareth and Akko. I
met some young people and, here too, learnt a lot about films, music, cooking… (fifth and sixth
picture).
In Jerusalem my day hosts were Avi and Shulamit, and the night host Magd. With them we went to
the Barata centre (a home for people who escape from the ultraorthodox families). There we met a
lot of young people, all of them with an interesting story to tell (seventh and eighth picture).
I am sure that for knowing Jerusalem one life isn’t enough… and there will always be some new
things to discover!
All the families gave me a lot, surely more than I could give them back. They opened their houses
and hearts with a big smile. Now, when I think about Israel, I don’t see only the problems, but also
the beautiful people I met.
I really hope that all of you will have the possibility to discover a new country, because for me it was
a great experience!
So, thank you again to all the people who helped and hosted me during this trip! 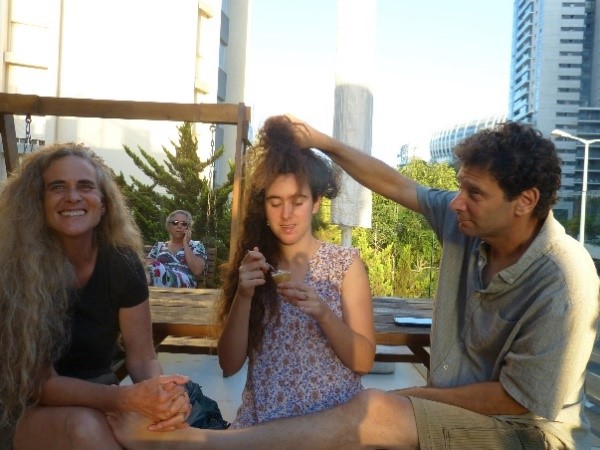